British Airways (BA) has announced that it is facing a schedule disruption, owing to a glitch in its IT systems.

"A number of flights continue to operate but we are advising customers to check ba.com for the latest flight information before coming to the airport," it tweeted, adding that passengers should allow extra time. 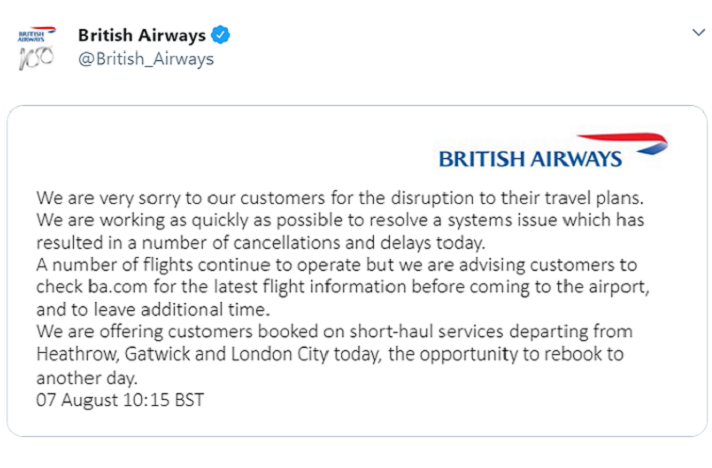 More than 80 flights have been cancelled at Heathrow Airport and another 10 at Gatwick, reported the BBC. The disruption has delayed more than 200 other flights, it added.

The BA website has halted ticket booking for the time being. "We are experiencing some systems problems today which are affecting check-in and flight departures. Please check manage my booking for the latest flight information and allow extra time at the airport," it said. 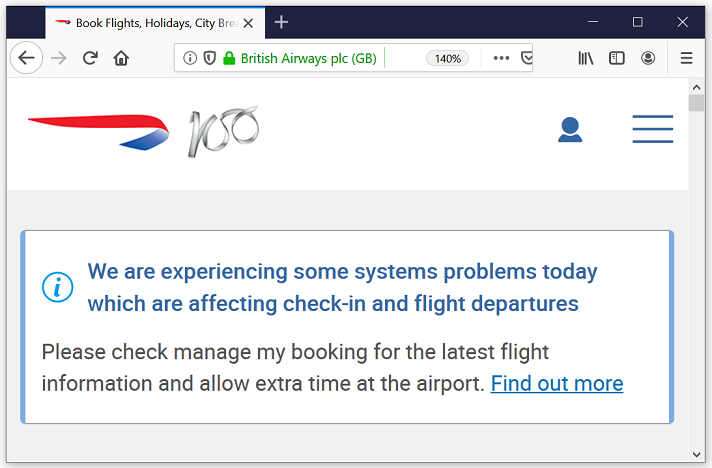 Complaints and criticism have been pouring in after BA tweeted about the glitch. "Due to fly back from Larnaca today on BA2673. Your manage my bookings page won’t load so can’t see flight status. Can you give me some information please," tweeted passenger Jason Wicks.

"I’m @manairport on BA1385. Called to gate at 06:25. Told at gate at 06:40 that there was a worldwide @British_Airways system outage, and that there would be an update in 30 mins," tweeted another passenger Paul Jones.

The airline has clarified this was not a global outage, but an issue with two separate systems for online check-in and flight departures respectively, said the BBC report.

Industry commentators have been particularly critical about this incident happening so soon after BA received a heavy fine from the ICO for breaches of GDPR.

In a separate opinion piece for SC Media UK, Paul Farrington, EMEA CTO at Veracode commented: "For this glitch to happen so soon after BA received a £183 million fine as it failed to ensure the protection of customer data, it seems like the airline is not acting swiftly enough to resolve its software issues. The IT systems used by airlines are very complex to navigate, but airlines should already have a strategy in place to modernise its software.

"....the persistence and scale of the breach suggests a lack of focus on cyber-security from airlines. For an airline, reducing their security debt by remediating vulnerabilities that can leave personally identifying information (PII) of their customers exposed or halt their operations strong should be just as important as keeping their planes in the sky, as the impact of a breach can have consequences beyond what happens on the ground."