Cyber-attacks hit an all-time high last year.Yet, organisations are still suffering from a lack of budget to strengthen their security measures and train their employees, according to the Chartered Institute of Information Security.

The annual survey of the information security profession by the chartered institute (previously known as the IISP) reports that 62 percent of respondents said their budget increase for security in 2018 was below threat levels. That’s up from 54 percent giving the same response in 2017.

All these factors have led to severe attrition in the industry, noted the Chartered Institute report. "Bad management" was cited as the number one reason for leaving a company. Lack of autonomy or ability to use initiative, career progression and to experience variety were also prominent reasons given for job change.

These reasons seem more valid when we consider the age group of cyber-security professionals. "The ages of people filling the survey in are mostly flat, but still there are twice as many younger people reflected than when the survey began," the report said. 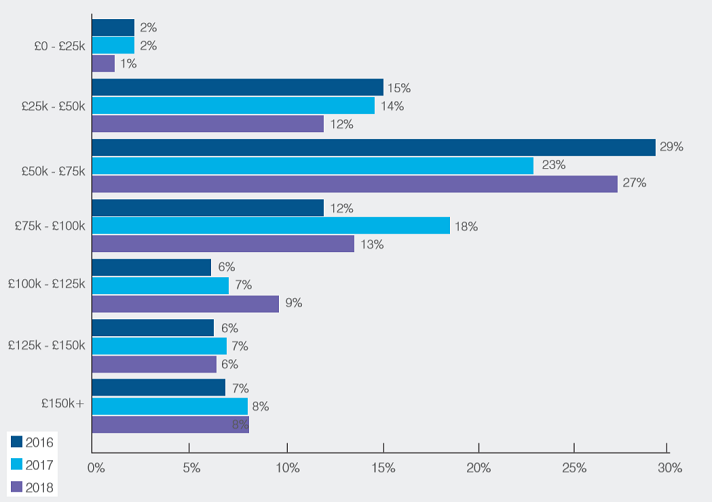 When it came to pay, the industry gave a mixed response. Almost nine out of ten respondents were earning above £50,000 and close to a quarter were on six-figure packages. However, only two of the seven pay bands listed by the Institute showed an increase over last year.

"In the middle of a skills shortage, organisations need to treat their workers carefully. Losing them through a lack of investment, through failing to help develop skills, or simple poor management, cannot be allowed," said Amanda Finch, CEO of the Chartered Institute. However, hiring just anyone to fill the vacancies poses the risk of worsening an already bad situation, she warned.

"Instead, organisations must understand what roles they need to fill; what skills those roles demand; and what skills applicants have. Armed with this, businesses can fill roles and support workers throughout their careers with the development, opportunities and training they need," she added.

"People join security posts for the remuneration, the opportunity and the variety; they move on when managers under-perform or if that opportunity doesn’t materialise. It would be an unwise organisation that didn’t recognise this, given the rising threat, the shortage of people and the other financial/regulatory pressures they face," the report concluded.

Why boardrooms need to worry about Digital Risk