A sizeable 40 percent of CISOs have felt forced to use worst-case scenarios to gain the attention of decision makers, despite recognising the damaging side effects of a ‘Project Fear’ style approach rather than stating a precise business case, according to a new Forrester report. The report also found that companies are suffering from security data overload, with many firms having an average of nine different categories of security technologies in place.

However, Forrester found that the SPM market lacks maturity overall, with four out of five security metrics used in enterprise security performance assessments lacking in context or objectivity. Examples include the number of malware incidents blocked or number of data loss prevention incidents generated (which don’t include the number of incidents which were not blocked). Other metrics in the top five, like the percentage of intrusions blocked by firewalls or the percentage of phishing emails filtered, might benefit from the context of a percentage, but fail on visibility, only covering a limited scope and relying on the analytical skills of the report architect.

Jake Olcott, VP of government affairs at BitSight explained to SC Media UK that context plays a crucial role in delivering valuable metrics: "Benchmarking is crucial to help business find context in the data. Executives and board members care more about relative performance using metrics that measure operational effectiveness. Reporting on the number of intrusions blocked is not just a meaningless metric because it lacks company-specific context (how many intrusions were successful?); it's a meaningless metric because there's no relative comparison to peers, competitors, or sector as a whole."

This lack of meaningful metrics has resulted in a range of disadvantages, but most critically in that companies are simply amassing more data without the ability to effectively analyse it. A significant 63 percent of enterprises have invested in new technology as a way to improve security performance measurement, but this in itself has led to an increasingly complex security ecosystem. Indeed, the Forrester analysts found that companies have an average of nine different categories of security technologies in place.

This fragmented landscape is one of the reasons driving SPM adoption, Olcott continued: "Organisations have been accustomed to making security technology purchases without measuring the effectiveness of those efforts. There are many reasons for this, including the difficulty that organisations have in operationalising their security products. Greater focus on security budgets inside enterprises will drive adoption of security metrics as a way of justifying spend." 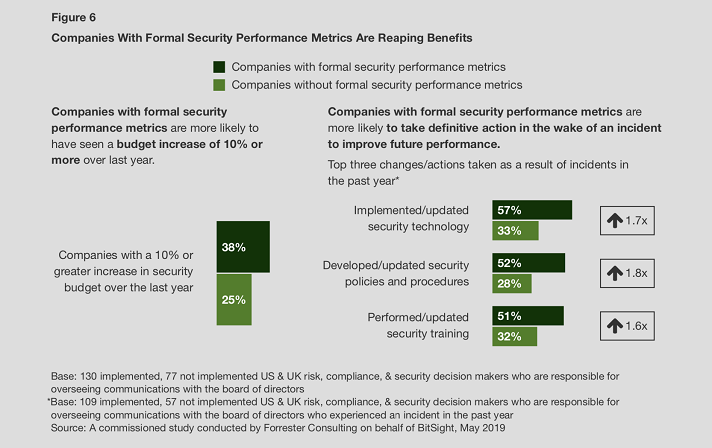 Gartner: Five security questions your board will always ask

Where's the CISOs? - missing from more than a third of Fortune 500

£13.8 bn increased spending - how much for cyber and will it materialise?