We are moving past the peak of globalisation says Sir John Sawers, former chief, Secret Intelligence Service (MI6) in the first Keynote of the day, Forecasting Threats, which described today's macro-economic/political background.

The days of ever greater interdependence which characterised international relations up to early part of this decade have gone. Instead we have increased competiton between powers behaving nationalistically, seeking technological advantage at a time when Western politics are not as unified as before. Strategically there is now a real economic rival with China, and a real threat from Russia, plus Western countries can't rely on each other the way they used to. 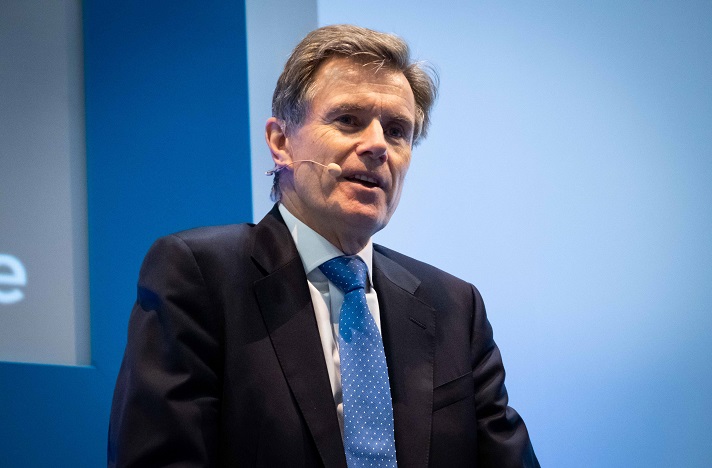 Sawers kicked off noting how, as an invitee to Bond film launches, he was always curious as to who the baddie would be - usually a meglomaniac surrounded by leggy East European blondes seeking to dominate the world by force. Before Trump even got a mention, he was already in the minds of the audience.

When it comes to real world threats, Sawers outlined his focus on the three themes that, in his view, were causing greater disruption than clashes in Hong Kong, tensions on the Turkish border, potential conflict with Iran and the climate change protests. They are, Great Power politics, changes in western politics, and technology.  And the first two frame the direction of the third, including balkanisation of the Internet, reiterrating the quote from Russian President Putin who said that the nation that controls AI will rule the world.

Former western dominance, once accounting for three quarters of world GDP, added to unchallenged US military dominace following the end of the USSR, is now under threat from China, which is approaching parity with the US.

Economically China is growing at six percent a year, but whereas previously, as countries became more developed, once they got over US$ 10k per capita income, they became a democracy, China is developing a new political model, aiming to be a successfull autocratic state.

Europe thrived on a rules-based world back by international institutions, but it is less powerful in a Great Power world, especially if it doesnt have the great tech companies.

Second, western politics is going through populist period, even though its past its peak in mainland Europe.  Britain and the US, who avoided populism in 1930s, have now surged in nationalist sentiment - partly due to failure of economic systems to deliver benefits to their countries as a whole. And as they become nationalist and isolationist it makes the western political model less attractive, and instead the great powers have become the dominant force changing world.

When it comes to technology. Sawers noted how, although M16 was essentially a human intelligence agency with GCHQ as the technology focus, he had to increase spending on technology from a third to half his budget as tech so important - including data analytics to see who was posing a threat, where propaganda coming from, lives moving online, extremist websites crucial for terrorist movements, and of course, cyber as an attack tool and crucial part of national defences.

Talking about cyber-attacks, Sawers said of the 2011 Stuxnet attack on an Iranian nuclear reactor, "I view it as a failure as there had been others that the Iranians hadn't detected. Whereas this they detected, reverse engineered it and used it to attack Saudi Aramco and nearly brought to a halt to its operations".

He also ran though the other known state cyber-offensives including WannaCry "...a revenue raising attack by the North Koreans";  Not Petya, "...very sophisticated - including some tools leaked from NSA. In Ukraine it was a Russian state cyber-attack, but it went viral which was not the Russian intention, but it attacked all who didn't have defences in place." Those such as Maersk and others who were hit were described as having been "side-swiped - roadkill."

After mentioning the vulnerability of supply chains, and how attack tools available to hositle actors are getting more powerful Sawers went on to explain how this had spilled over into commerce in the battle for control of military security technology. He cited attempts to buy UK and German companies by China as it sought to plug gaps in its own technology and short curcuit its own R&D timeline to match the west.

Regarding the Great Power rivalry and decline of westerm power, Sawers commented, "We are moving past the peak of globalisation. Now the US and Chinese defence systems are decoupling.  China's 2025 programme is seeking dominance of all technology, especially machine learning. As Putin said - the nation that controls AI will rule the world. It will become a central part of Great Power rivalry."

As the US becomes less aligned to its allies, Sawers says Europe - including the UK - will need its own defence technology, both for its capabilities and for leverage with the US.  If the US were to buy the tech companies it wanted from the UK - such as UK defence contractor Cobham which was the subject of a US takeover - would they bother about UK security interests?  He adds, "The ever greater interdependence seen up to the early part of this decade has gone, in a strategic sense there is a real rival in China, a real threat from Russia and western countries can't rely on each other the way they used to."

Sawers addressed the issue of Huawei as a strategic threat in the same context.  "Huawei has made itself important in international telecoms infrastrucutre - one of four or five organisations in the world." However, he played down the intelligence and espionage/security threat of having in Huawei supply UK systems, noting: "All Chinese equipment goes via a GCHQ UK checking station in Bandbury and we've never seen Chinese spying efforts in this equipment  - though we've seen it elsewhere."

For Sawers the risk is that there are so few players -  Huawei, Erikson, Samsung & LG, and no big American player.  For the US, if there is an espionage threat, it needs to be mitigated, and there is an industrial strategy argument that want to rely on their own western manufacturers rather than rely 100 percent on Huawei which would make them very vulnerable.  Part of the issue is also that Huawei is also a point of leverage in US/China negotiations, so he says he expects a mini-deal and concessions on Huawei - but the much wider issue of who the industrial players are in that sector remains.

Looking at China's "fantastic technology development policy" under its Made in China 2025 programme, Sawers notes that its not all about stealing western technology and that it has a "Remarkable self-generating technology capacity," and in some areas such as electronic payments, Chinese technology is ahead of Europe and even more so the US."

When it comes to the advisability of takeovers, Sawers described it as achieving a balance between economic benefit and national interest in terms of technology dependence risk. "The power of governments to scrutinise takovers is on the rise and will continue," said Sawers, noting how the US has tightened rules on foreign investment, as has France, UK, and Germany, bringing in rules for closer scrutiny, particularly for Russian and Chinese acquisitions. And Japan has said that if more than one percent of its tech firm is being bought for a foreign entity it will be subject to scrutiny.

While he said he was not sure of the end point of this trend, he did say that it would encourage local interations of the internet, which was not a good thing as it, "..was designed for free and global use, not designed for security purposes, but for open working.  Which is why its so vulnerable to exploitation.  Everyone feels vulnerable to internet use, but China and Russia more so."

As a result he expects them to, "create their own internets, in case they need it in a crisis, and once they can run separate from the global internet, it will become the method of choice.  We will see even tighter control of China's greatfirewall to exclude unwanted foreign infromation, and protect its own developed technology from theft.  Its not a good thing as we will lose the global qualities of the internet, but its the direction we are going."

Digital Transformation Expo: 'It's not the technology. It's the authority'